If you need a more accessible version of this website, click this button on the right. Switch to Accessible Site
Our offices are OPEN and following the recommended guidelines of the CDC

HAVE A QUESTION?
PATIENT PORTAL 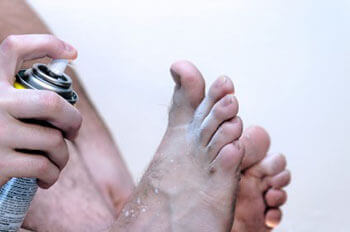 Athlete’s foot is a fungal infection that’s highly contagious and can be spread through direct skin to skin contact as well as indirect contact. Athlete’s foot can be spread directly when an uninfected person touches the infected area of someone who has athlete’s foot. The condition can be spread indirectly through contaminated surfaces, clothing, socks, shoes, bed sheets, and towels.

Athlete’s foot is spread by direct contact with an infected body part, contaminated clothing, or by touching other objects and body parts that have been exposed to the fungus. Because the feet are an ideal place for tinea to grow, thrive, and spread, they are the most commonly affected area. The fungus is known, however, to grow in other areas as well.

Those who are affected by athlete’s foot may experience symptoms such as cracking, dryness, flakiness, itchiness, redness, or scaliness of the skin of the foot or in between the toes. Oozing, crusting, swelling, and the formation of blisters are other symptoms that may arise due to athlete’s foot.

Sometimes people will not even know they have Athlete’s foot due to a lack of symptoms.

If athlete’s foot goes untreated, there is a high risk that it may spread from toe to toe. With this in mind, it’s highly recommended that you meet with a podiatrist for a professional diagnosis. Your podiatrist can give you information about treatment options that best suit your case.